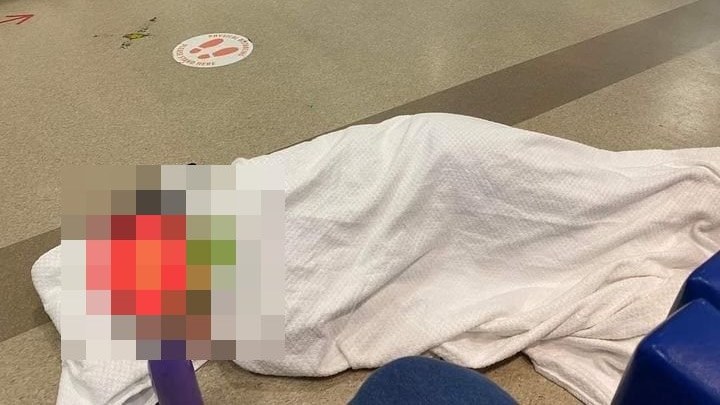 The South Australian government says an investigation is underway after a picture emerged of a patient lying on the waiting room floor of an emergency department.

The photo, posted on social media, shows a person on the hospital floor with a white blanket covering them during a reported five-hour wait.

Prime Minister Peter Malinauskas said the fact that someone felt the best place for them was to lie on the floor was “unsatisfactory”.

“And it is important that even though we acknowledge errors in the system, we confuse it with the extraordinary efforts that are made daily and for hours by nurses, doctors, rapporteurs, cleaning assistants in the hospital system who have worked. Back-to-back- to-back-to-back, “he said.

“So we acknowledge their efforts, but also acknowledge that what happened was not acceptable, and that is why there is an investigation into the particular case.”

Yesterday, the doctors’ union sounded the alarm about what it said were serious safety issues at the congested emergency rooms at the state’s two largest hospitals.

The hospital’s overcrowding problem has been on the rise for years under successive Labor and Liberal governments.

But SA Liberal leader David Speirs said the government made health “a massive issue” before the state elections in March and urged them to “get on with what you promised”.

“They have now been in office for three months and things have been worse than ever,” he said.

Opposition health spokeswoman Ashton Hurn said the government was focused on stopping ramping at the expense of problems inside the hospital and that a system-wide review was needed.

“Our health care system is under tremendous pressure and it’s only getting worse as we plunge into the depths of winter,” she said.

But Mr Malinauskas said his government was moving at “warp speed” to try to improve the situation it has inherited.

“This time last year in South Australia our hospital system was under pump with record highs and there was no flu and zero COVID and now we both have at the same time,” he said.

“Now we have put hundreds of extra beds into the system over the course of 10 weeks, which has worked flat-chat, we are recruiting more staff than ever before.

“But of course you get to a point where there is only so much you can do before the long-term investments we make take effect.”

“And we’re moving at chain speed to try to achieve that in terms of healthcare delivery, but the system is under massive strain around the nation at the moment, and unfortunately southern Australia is no exception.”