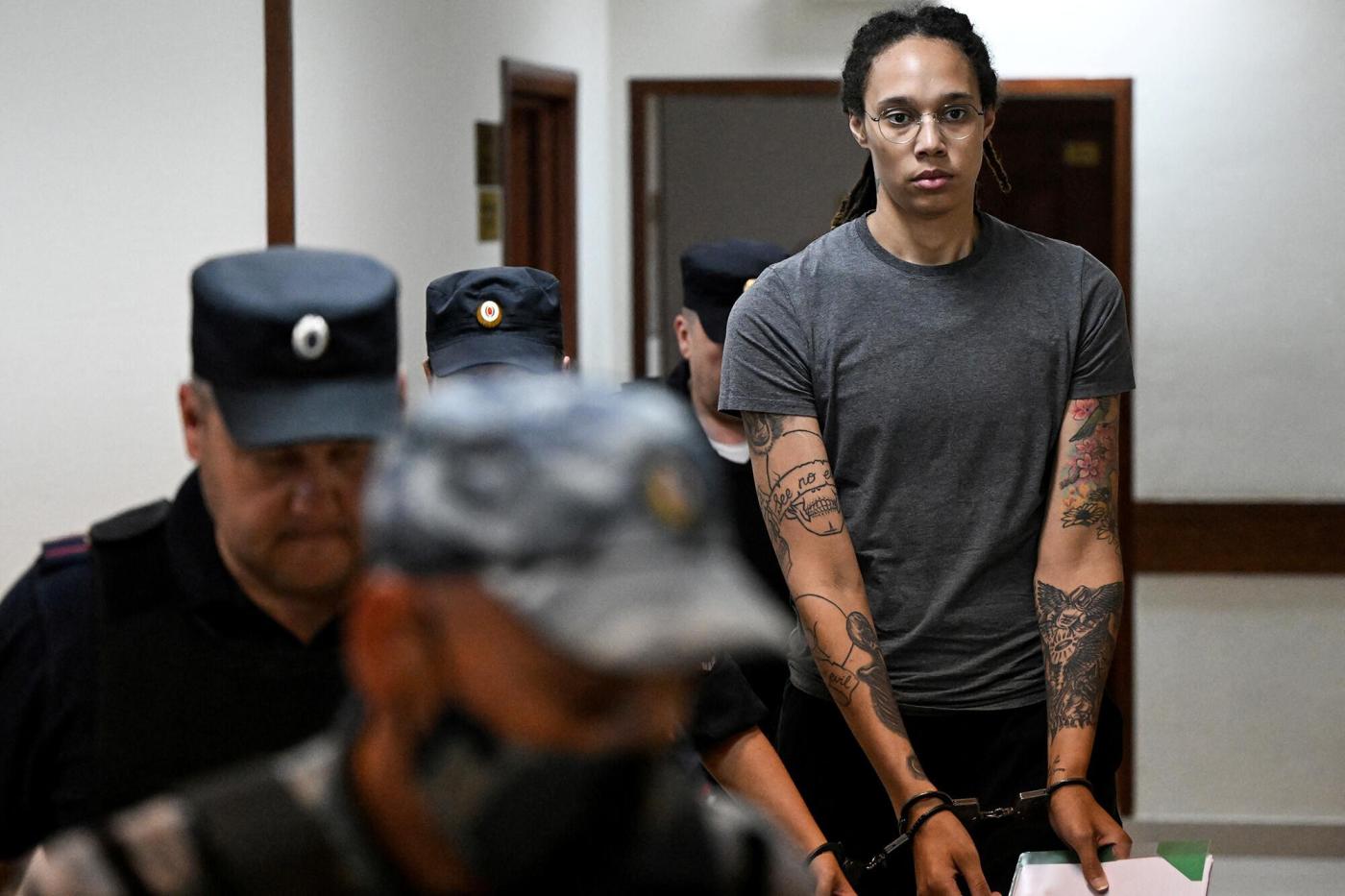 Griner was released in a prisoner exchange involving Russian arms dealer Viktor Bout. However, the exchange did not include another American that the State Department has unlawfully detained, Paul Whelan.

“She’s safe, she’s on a plane, she’s on her way home,” Biden said Thursday morning at the White House alongside Griner’s wife, Cherelle. “After months of being unfairly detained in Russia, held in unbearable conditions, Brittney will soon be back in the arms of her loved ones, and she should have been there all along.”

Biden acknowledged that Griner’s release occurred while Whelan was imprisoned, saying Whelan’s family “must have such mixed feelings today.”

“This was not a choice of which American to take home,” Biden said. “Unfortunately, for totally illegal reasons, Russia is handling Paul’s case differently from Brittney’s. And while we haven’t managed to get Paul released yet, we’re not giving up. We will never give up.”

Griner is expected to land in San Antonio, Texas, a US official told CNN.

Griner’s February arrest in Russia sparked a diplomatic drama between the US and the Kremlin that played alongside Russia’s war in Ukraine. At the same time as the US was issuing crippling sanctions in response to the war in Ukraine, US diplomats kept open lines of communication with Moscow over prisoner negotiations to try to secure the release of both Griner and Whelan.

“This is a day we have been working towards for a long time. We never stopped pushing for her release,” he said.

According to senior officials in the Biden administration, the prisoner exchange took place in Abu Dhabi on Thursday. A joint statement from the United Arab Emirates and Saudi Arabia said the Gulf states played a role in brokering the exchange between the US and Russia.

When asked when Griner would be home after his comments, Biden indicated it would be within the next “24 hours.” As for what he would say to Whelan’s family, he said, “We’re talking to them.”

Cherelle Griner thanked the administration for helping secure her wife’s release, saying she was “overwhelmed with emotion”.

Both she and Brittney Griner “will remain committed to bringing every American home, including Paul, whose family is in our hearts today,” she added.

Whelan told CNN in an exclusive call from the penal colony detained in a remote part of Russia that he was “disappointed” that the Biden administration has not done more to secure his release. Whelan said he was happy that Griner was released, but that he “was led to believe things were moving in the right direction, that the governments were negotiating and something would happen pretty soon.”

“I don’t understand why I’m still sitting here,” he said.

The prisoner exchange drew criticism from Republicans, who accused the Biden administration of releasing a dangerous prisoner back to Russia without securing Whelan’s release.

“This is a gift to Vladimir Putin, and it puts American lives at risk.” tweeted House GOP leader Kevin McCarthy. “Leaving Paul Whelan behind for this is unconscionable.”

Griner, who had played for a Russian women’s basketball team for years off-season, had been in jail since February, when she was arrested at a Moscow region airport on charges of drug smuggling. Despite her testimony that she accidentally packed the found cannabis oil in her luggage, she was sentenced to nine years in prison in early August and transferred to a penal colony in the Republic of Mordovia in mid-November after losing her appeal.

‘The only deal we can close now’

Months and months of “difficult” negotiations with the Russians culminated in the prisoner swap on Thursday, senior US government officials said, with it only becoming clear in recent weeks that there was an opening to secure the American basketball player’s release.

The final deal itself came about in the past 48 hours, the officials said, launching the process to get Griner out of the penal colony where she served a lengthy sentence.

That opening, while a major breakthrough, was still a “painful one,” the officials said: In exchange for a convicted arms dealer, Russia would only agree to release Griner and leave behind another American – Whelan. During multiple engagements in recent weeks and months, Russian officials have made it clear that releasing Bout was the only way to free Griner from her detention.

Biden gave final approval for the prisoner swap that released Griner last week, an official familiar with the matter said.

Biden was briefed throughout the morning as he awaited confirmation that Griner was back in US hands, a US official said. Once that was done, Biden spoke with Griner of the Oval Office, with Cherelle Griner, Vice President Kamala Harris and Secretary of State Antony Blinken also on the phone, a second official said.

The Russians recently indicated they were only willing to negotiate for Griner and not Whelan, a US official said, because Russia said it handles their cases differently based on what each is accused of.

The Biden administration made repeated offers to have Whelan released as part of this deal, even after Russia made it clear that only Griner was acceptable.

When it was finally clear that Russia would refuse Whelan, the US had to accept it.

“It was a choice to get Brittney or nothing,” the US official said.

The official says this was a “tough decision” for Biden, but again, one he felt he had to make.

Griner moved from the penal colony to Moscow in the past 48 hours. Thursday morning she boarded a plane to the United Arab Emirates. Once there, she was met on the tarmac by U.S. officials, including Presidential Special Envoy for Hostage Cases Roger Carstens. She was in “an extremely cheerful mood” and “all smiles” and “thankful”.

Whelan, an American, Irish, British and Canadian citizen, was detained in a Moscow hotel in December 2018 by Russian authorities who claimed he was involved in an intelligence operation. He was sentenced to 16 years in prison on espionage charges which he has vehemently denied. Whelan had served his sentence at another labor camp in Mordovia, an eight-hour drive from Moscow, where he told CNN in June 2021 that he spent his days working in a garment factory he called a “sweat shop.”

Whelan’s family welcomed the news that Griner is on his way home, but said on Thursday they are “devastated” that he was left behind.

“It’s a great day for the families of the wrongdoers and we feel great for them,” David Whelan, Paul’s brother, said on “CNN This Morning.” “But we are concerned about Paul’s future. I think it has become clear that the US has no concessions that the Russian government wants for Paul. So I don’t know exactly what the future holds.”

In an email to the media, David Whelan said his family was “devastated” by the news and is increasingly concerned that Paul will not survive the rest of his sentence.

Earlier this year, after the US secured the release of Trevor Reed, another American detained in Russia since 2019, Paul Whelan expressed his frustration in a statement shared by his parents.

“Why was I left behind?” said Whelan in April. “While I’m glad Trevor is home with his family, I’ve been incarcerated for 40 months on a fictitious charge of espionage.”

‘Merchant of Death’ included in exchange

Bout has returned to Russia, the Russian Ministry of Foreign Affairs reported on Thursday. The prisoner exchange with Griner was “successfully completed at Abu Dhabi airport” on Thursday, the ministry said.

It was a US decision to have the exchange take place in Abu Dhabi, an official familiar with the discussion said. “Russia was happy with it”, after which the UAE facilitated and took care of the location.

When Putin and UAE President Sheikh Mohamed Bin Zayed Al Nahyan, known as MBZ, met in Russia in October, one of the topics they discussed was prisoner exchange. official told CNN.

The US knew that MBZ intended to raise the issue with Putin and there was nothing but encouragement from the US side, the official said.

“There was criticism of the meeting with Putin at the time. But that meeting is part of the reason Griner was released today,” the official said.

In his statement Thursday, Biden thanked the United Arab Emirates for helping with the exchange.

The UAE and Saudi Arabia said in a joint statement that the two countries were involved in joint mediation efforts leading to the prisoner swap. The statement said the “success of the mediation efforts is a reflection of the mutual and solid friendship linking both countries with the United States of America and the Russian Federation.”

When asked about Saudi Arabia’s role, US officials suggested that a number of countries were involved.

“We have done that and I am sure we will continue to rely on partners around the world to work this out with us and give us their ideas and convince the Russians how important it is for us to resolve matters. We appreciate those partners helping us,” said a government official.

Nicknamed the “Merchant of Death,” Bout is a former Soviet military officer serving a 25-year prison sentence in the United States on charges of conspiracy to kill Americans, acquire and export anti-aircraft missiles, and provide material support to a terrorist organization. Moscow had dismissed his 2012 conviction as “baseless and biased” and Bout has maintained his innocence.

Steve Zissou, Bout’s US attorney, told CNN on Thursday that the prisoner swap between Griner and his client was “fair.”

“As I have been insisting for some time, given Viktor Bout’s 15 long years in custody since the United States government targeted him in 2006, his exchange with Brittney Griner, who has only been in custody for a few months, is reasonable. . Zissou said in a statement.

Zissou told CNN his legal team knew 24 hours ago that a trade was imminent.

This story has been updated with additional developments.